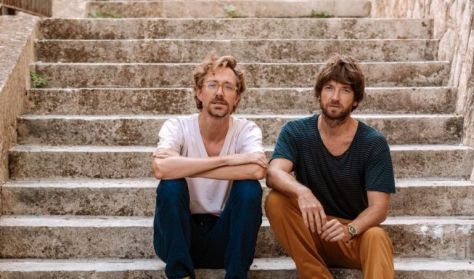 Some 20 years after the release of their first full-length album, the Norwegian pop duo Kings of Convenience will finally perform in Hungary. The concert promises to be a genuine sensation, given that the band is one of the most influential and finest proponents of acoustic pop music in the 21st century.  more

What's more, the duo are coming to Budapest as part of the tour for their superb new record. After a 12-year break, the 2021 album Peace Or Love has put the guitarists and singers Erlend Øye and Eirik Glambek Bøe back on the map. For their fourth LP, they have once again written clear, enchanting pop songs that recall the music of Simon & Garfunkel.

The Kings Of Convenience exploded into the global public consciousness in 2001. The band made a statement of intent with the title of their debut album: Quiet Is The New Loud. Indeed, the duo found themselves at the forefront of an entire music scene, christened the New Acoustic Movement (Badly Drawn Boy, Turin Brakes) by the British press. 'Exploded' is perhaps a slightly excessive way to describe such refined, peaceful music, but there was no mistaking the pair's huge impact. The duo, whose music evokes the finest songs, sound and harmonies of Simon & Garfunkel yet still retains its own unique character, produced a true classic with their second album, Riot On An Empty Street (2004). Though they later slowed down - as befits their musical style - that level of quality has never been lost. Folk pop, indie folk, chamber folk - however you categorise it, their relaxing, soft, mellow-toned yet compelling songs are always a heart-warming listen. Both members of the band have also been active and successful on their own merits in the past 20 years (Erlend Øye through his solo dance records, DJ mixes and indie band The Whitest Boy Alive). Yet when they take to the stage together, the arena will be filled with their ever sensitive, ethereal and stirring music.

Opera in two parts, three acts, in Hungarian, with Hungarian and English surtitles The text and musical material for the production have been created using both the original and the baritone versions